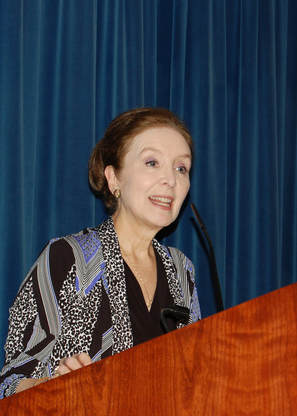 Veronica Mary Rolf is an independent scholar educated at Columbia University, an academic lecturer, a former Broadway actress and professional playwright, and a Master Teacher of Dramatic Arts in New York, London, Buenos Aires, and Berkeley.
She is the author of Living Resurrected Lives: What it Means and Why it Matters, co-authored by Eva Natanya (Cascade Books, 2020), which won a 2021 Catholic Media Association Book Award for Spirituality; Suddenly There is God: The Story of Our Lives in Sacred Scripture (Cascade Books, 2019), which won a 2020 Catholic Press Association Book Award for Scripture; An Explorer's Guide to Julian of Norwich (IVP Academic Press, 2018), which won the 2018 IVP Readers' Choice Award; and Julian’s Gospel: Illuminating the Life & Revelations of Julian of Norwich (Orbis Books, 2013), which won a 2014 First Place Catholic Press Association Book Award, the Nautilus Gold Medal Book Award for Spirituality, and the National Indie “Excellence” Book Award for Religion/Non-Fiction.

After a long career playing leading roles on Broadway, in classical theatre, and on television, Veronica was appointed as the first actress in the Affiliate Artist program, sponsored by the National Endowment for the Arts. In this capacity, she performed her One Woman Shows as a goodwill ambassador throughout the United States. As a dramatist, she has seen her plays produced on the New York stage and on television. She was also the founding Artistic Director of The Center for Creative Collaboration, Inc. in New York City, dedicated to helping at-risk youth through the arts, the marketplace, and the community. Veronica designed and taught a three-year course on the history of Christian Mysticism entitled Ascent to the Divine. She has also been affiliated with the World Community for Christian Meditation (wccm.org), giving meditation workshops, conducting meditation groups, and leading contemplative retreats.
Currently, Veronica podcasts on her popular series: Life, Love, & Light, available on Apple and Google Podcasts, Spotify, Stitcher, Pandora, and a host of other directories, including https://www.lifelovelightpodcast.com/. She also leads Virtual Retreats on themes of contemplative spirituality. ​She is the administrator of the Julian of Norwich Group on Facebook and of the One Thousand Acts of Peace website (http://www.onethousandactsofpeace.org/), which has spawned educational programs and peace activities worldwide. She also writes about spiritual topics on https://www.veronicamaryrolf.com/
​Veronica has been married for over forty years to the actor/director, Frederick Rolf. Their son, David, is a senior technology executive and their daughter, Eva Natanya, PhD, is the Executive Director of The Center for Contemplative Research in Crestone, CO, and a scholar of comparative religion.
Contact Veronica