In May of 1373, a young woman named Julian, living in Norwich, England, received sixteen Revelations of Divine Love. Over the course of several decades, she set them down in the first book ever written by a woman in the English language. Her words remained virtually unknown for six hundred years, until the twentieth century. Today, Julian's voice resonates across the ages, speaking to us of the unconditional love and mercy of God with a passion that is irresistible. It is a voice we need to hear . . . 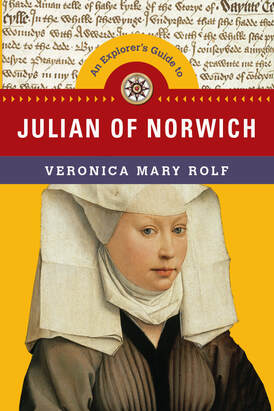 Winner of the 2018 IVP's Readers' Choice Award
An Explorer's Guide to Julian of Norwich
by Veronica Mary Rolf
(InterVarsity Academic Press, 2018)
​
The Revelations of Divine Love by Julian of Norwich is an astounding work of Christian mysticism and a unique contribution to Christian theology. Thomas Merton called Julian “one of the most wonderful of all Christian voices” and former Archbishop of Canterbury, Rowan Williams, termed the Revelations “the most important work of Christian reflections in the English language.” Yet despite Julian's worldwide popularity and great appeal, some readers have difficulty entering into her medieval mindset and understanding her mystical theology. They need a personal guide to explore the historical and religious context of her text in order to shed light on her Revelations.
​Veronica Mary Rolf, who has been studying Julian's text for decades, serves as a reliable guide for readers willing to take up and read the Revelations of Divine Love. With dramatic intensity, Rolf sets Julian's text in its tumultuous fourteenth century context and sheds light on each one of Julian's sixteen Revelations. Then she digs deeper into Julian's theological themes, including the innovative notion of the "motherhood of God." She also offers a chapter on developing and leading a retreat with Julian's  Revelations, both for individuals and groups. Throughout, Rolf advocates taking a deeply contemplative approach to Julian's Revelations if we are to experience her profound realization that because God is Love, “all shall be well.”
Starred Review in Publishers Weekly, 4/9/18:
In this exquisite book, scholar of medieval studies Rolf (Julian’s Gospel) introduces medieval mystic and Christian theologian Julian of Norwich in all her astonishing brightness. . . . Rolf plumbs Julian’s spiritual audacity in this must-read for those interested in medieval Christianity and literature. (For the complete review see "Book Reviews" on this website.)
Review by Fr. Richard Rohr, OFM, Center for Action and Contemplation, NM
The grand and optimistic vision of Lady Julian is fully presented and profoundly supported in this excellent guide by Veronica Mary Rolf. I have been fed for many years by Julian, but this is a new and generous feeding. It can serve as a first-time introduction to this marvelous mystic or a fifth-time deeper journey.
​Review in Magistra, Summer, 2018:
Those of us who have been living with Julian's writings for a number of decades have good cause to be deeply grateful for the work of Veronica Mary Rolf (her book Julian's Gospel published by Orbis in 2013 has become a classic). An Explorer's Guide contextualizes Revelations of Divine Love succinctly yet by no means superficially. The author has a happy gift of knowing her readers' questions before they are asked; she is a trustworthy and profoundly reliable guide. She illuminates God's revelations to Julian and then digs more deeply into Julian's central themes. Her book closes with a chapter on developing a retreat centered on Julian's writings.
-- Luke Penkett, CJN, The Julian Centre, Norwich, England
Review in Catholic San Francisco 7/12/18:
Rolf wrote “The Guide” at the invitation of her publisher, InterVarsity Academic Press, to lead a young audience to understand Julian’s life and to put her writings in a historical and theological context. “The Guide” is also excellent for readers of every age who want to begin a companionship with Julian. . . . Rolf focuses on how the mystical dimension can illuminate our faith, if we allow it to do so. As a longtime teacher of Christian meditation, her mission is to bring the mystical experience into our lives today through the practice of contemplative prayer. Rolf even offers a chapter on making a retreat with Julian’s “Revelations.” -- Liz Dossa, Mercy Center Retreat, Burlingame, CA
(For the complete review, see "Book Reviews" on this website.)
Review in Reading Religion, 11/2/18:
For what Rolf has set out to do, namely, to guide the reader through the important elements of Julian's world and thought to bring to life this classic text for the lay reader, she has succeeded. The reader desiring to navigate Julian's text for the first time, to seek God's presence through it, and to engage the challenges and biggest questions of a life of faith will find in Rolf a knowledgeable, personable, inspiring and faithful guide. -- Brian Dant, Regent College, Vancouver, BC
To read more Reviews
To order An Explorer's Guide to Julian of Norwich, please click on one of the links below: 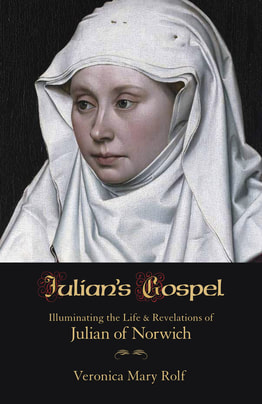 Julian's Gospel is a dramatic study of the Life and Revelations of Julian of Norwich, one of the most popular and influential mystical writers of all time. However, until now, the woman behind the Revelations has remained a mystery. Julian’s Gospel is the first book on the market to combine a historical reconstruction of Julian’s life in fourteenth century Norwich with a comprehensive commentary on the eighty-six chapters of the Long Text of her Revelations –  in a new and faithful translation from the Middle English. Unlike other brief summaries of Julian’s life and times, Julian’s Gospel goes in-depth to uncover the political, cultural, social, and religious milieu that formed and deeply influenced her development as a woman and a mystic. Also, unlike other textual companions to Julian’s work that provide only short explanations of Middle English words, or merely footnote theological terms, Julian’s Gospel gives the reader a detailed analysis of her writings, illuminating her ground-breaking mystical theology with extensive scholarship and interpretation. Throughout, the book creates a strong dramatic arc for Julian’s Revelations that interweaves her personal sufferings and burning questions with her visionary experiences, producing a compelling spiritual biography.
Selected Reviews:
It is possible that Veronica Mary Rolf’s book will become the definitive work on Julian of Norwich. Her book is a masterpiece of scholarly historical research and amazing theological insight into Julian’s Revelations, one of the classics of medieval spirituality.
-- Catholic Library World Quarterly
The prizes that her volume has garnered to date indicate that it has already been well-received as a popular introduction to the medieval anchoress and her work. That a new book about Julian should find such an audience speaks to the continuing capacity of her writings to reassure her readers that “al shal be wel, and al shal be wel, and al manner of thyng shal be wele.”
​-- London Times Literary Supplement
To read more Reviews
To order Julian's Gospel, please click on one of the links below:
Orbis Books
Amazon
Barnes & Noble
Amazon UK